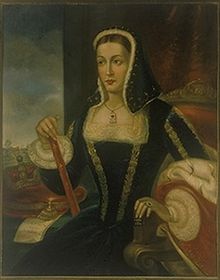 Painting of Eleanor, Giudicessa of Arborea

Eleanor of Arborea, 1347—1404, was a Sardinian noblewoman and judge, who was of the Giudicato of Arborea, a land run by judges, and an independent state.

She was born to the giudice of Arborea, Marianus IV and his wife, Timbora de Rocaberti. She had one brother, Hugh, who would later become Hugh III, as giudice after his father. Throughout her life, Eleanor was probably given a very diverse education that included war strategy, politics, cartography, the sciences, and more.

Her father had her marry Brancaleone Doria of Genoa, a nobleman who owned his own fief, and whose alliance with Genoa would bring them help in the future. Her father died in 1376 and was succeeded by her elder brother, Hugh. He was a good ruler up until 1383 when a republican uprising caused his assassination. The government went directly to the next male heir, Frederick, the eldest son of Eleanor. As he was far too young to rule, she became regent, and managed to halt the uprising and defeat the rebels.

A four year war with Aragon occurred after this, as the country was trying to retain power over Sardinia. Throughout this war, Eleanor and Arborea took control of more of Sardinia, and by the end had power over almost the entirety of the island. Her marriage led to a Genoese alliance, which provided more help for Eleanor’s cause. At the end of the war, she negotiated a very favorable treaty with the Aragonese.

Throughout her life, Eleanor was an avid ornithologist, and legislated protection for her favorite species, the falcons.

The Carta de Logu is a famous document that was put into effect April of 1395. It was drafted and notarized by Eleanor, and was hailed as the most progressive of all laws in Europe at the time. It stayed in effect until 1827, when the document was superseded by the Holy Roman Emperor.

Some of the laws greatly reduced the penalty for minor crimes. Instead of capital punishment, fines were imposed on the criminal. Women were also allowed property rights and the right to inherit in Sardinia.

2 thoughts on “Eleanor of Arborea”